Did you happen to hear The Victim on WITF?  Composer/writer Zachary David Terrazas and cast members Abbie Mummert, Jennie Dell, and Mike Smith went up to the studio to talk about The Victim and its impact!  Listen to the recording and write a comment on witf.org!  Listen here!

Video of the interview!

From the blog 'Living in Hanover'

Unfortunately, I have plans Saturday night and Sunday afternoon because that means I will miss the two performances of “The Victim” at Hanover High School.

I had a chance to watch some of a rehearsal last night for the show written and directed by HHS senior Zachary Terrazas. Performances take place at 7 p.m. on Saturday and Sunday on 2 p.m. Go see it. Seriously.

My daughter saw the stripped down version performed for Hanover Middle School students a couple of months ago and enjoyed it. Credit goes to the Gettysburg Community Theatre for standing behind the show and finding venues. If you go, besides the fact that you might have a hard-time believing a 17-year-old did this entire thing himself, you will learn an important positive message and see a good show.

Just a side note – the play once again reinforces something I have thought for a long time. This area is incredibly blessed with talented young people. The singing blew me away. These kids will impress you.

The performers give Zach a chance to harness his talents. He seemed in complete charge last night during the rehearsal, providing feedback and encouragement to the actors while also playing his electric piano. He had a great system of letting the other teens know what scene they would rehearse next by saying, “we;re going to do (plays opening notes of the song) and then we’ll do (plays opening notes of another song.” I liked that kind of shorthand for some reason.

But beyond the talent and the fun, the show projects a really important message. We can’t simply equate bullying with teasing anymore. When you hear stories of students harassed constantly in school and online, you have to realize this isn’t just people being too sensitive. Kids need to know that their actions have a consequence and no person deserves to be treated as less than equal. Sometimes people complain that the world has turned too politically correct and no one can take a joke anymore, but what some people criticize as political correctness is simply being a good and caring person.

Shows with student actors have probably passed this message along for years, but when the words, music and direction come from a fellow teen, hopefully the message will have a greater impact. I hope they get a great crowd this weekend and find a way to put on performances in many other schools.

From the Evening Sun!

CHEERS to all the students involved in the anti-bullying musical created by Hanover High School student Zachary David Terrazas. The cast includes students from throughout the area and aims at teaching other students about the cycle of bullying. At first glance, song and dance might seem like strange vehicles for such a serious message. And yet, when we consider the long tradition of dramatic opera, it becomes quite fitting. Creativity and compassion could be exactly the combination these young people need to educate their peers and effect positive change in the culture of bullying found in too many schools.

News Paper
From The Evening Sun 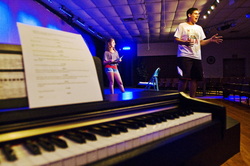 It's not an uncommon story. Many have been bullied. But for each person, it's about the worst thing that can happen.  And these days, bullying seems to have evolved into something more than a neighborhood hooligan dealing out wedgies.  It's psychological.  Words cut deeper than fists, and one can carry those scars for life.
Zachary Terrazas was bullied. It happened in sixth grade, he said, when another young boy picked on him.A lot.
"He was telling me I shouldn't live, and I should give up on myself," Zachary, 17, said. "It hurt more then, but as you grow older, you develop thicker skin."  Zachary, however, found comfort in the theater. And now, going into his senior year of high school, he took all those feelings and personal experiences, and wrote the story, lyrics and music for his original musical, "The Victim."
Zachary's musical will premiere soon, and is set for 7 p.m. Aug. 10 and 11 at the Gettysburg Community Theatre, 49 York St. Gettysburg.

Zachary has written several short plays, and as a musician, he enjoys composing his own music and lyrics. He combined the two about a year ago as he began penning "The Victim" to tackle an issue that impacts so many students.  Just a few months ago, Zachary had only a rough draft of the script, and a CD with its music when his former instructor, Chad-Allan Carr of the Gettysburg Community Theatre, heard about it.  "I get a lot of scripts,"  Carr said with a laugh. But when he saw what his former student had composed, he was impressed.Impressed not just that Zachary wrote a musical, which is a huge accomplishment in itself. He was impressed with its quality, and its powerful message.  Carr helped Zachary get it from a rough draft to the point where he and a cast of student actors are "workshopping" the musical. It's a process where they rehearse, singing the songs, acting out the scenes, and working out the bugs before they go live. The musical, Zachary explained, is about a high school girl named Claire who is being harshly bullied by another girl named Missy. The story is Claire's struggle to find out who she is, Zachary said.  But there's more.  "Sometimes the bully has as many weaknesses as the victim," he said.  That's the case with the character Missy, who is more than a one-dimensional mean girl. Missy's life may seem perfect on the surface - she hangs out with the cool kids, and has the ideal life in the locker-lined hallways of high school.  But at home, things aren't so great, which is why she's acting the way she does towards Claire.  Much of it comes from Zachary's own experience in similar locker-lined hallways.  It's an experience many have had, and he hopes it rings true with his audience. Whether they've been bullied, or bullied someone, or just witnessed it from the sidelines, it's a show that will entertain, and he hopes, change a few lives for the better.